The finite element analysis (FEA) technology by hydraulic-mechanical-chemical-damage (HMCD) coupling is proposed in this paper for inclined wellbore stability analysis of water-sensitive and laminated rock, developed basing on the recently established FEA technology for transversely isotropic rock with hydraulic-mechanical-damage (HMD) coupling. The chemical activity of the drilling fluid is considered as phenomenological hydration behavior, the moisture content and parameters of rock considering hydration could be determined with time. The finite element (FE) solutions of numerical wellbore model considering the chemical activity of drilling fluid, damage tensor calculation and weak plane strength criterion for transversely isotropic rock are developed for researching the wellbore failure characteristics and computing the time-dependent collapse and fracture pressure of laminated rock as shale reservoirs. A three-dimensional FE model and elastic solid deformation and seepage flow coupled equations are developed, and the damage tensor calculation technology for transversely isotropic rock are realized by introducing effect of the hydration and the stress state under the current load. The proposed method utilizing weak plane strength criterion fully reflects the strength parameters in rock matrix and weak plane. To the end, an effective and reliable numerically three-step FEA strategy is well established for wellbore stability analysis. Numerical examples are given to show that the proposed method can establish efficient and applicable FE model and be suitable for analyzing the timedependent solutions of pore pressure and stresses, and the evolution region considering the hydration surrounding wellbore, furthermore to compute the collapse cycling time and the safe mud weight for collapse and fracture pressure of transversely isotropic rock. 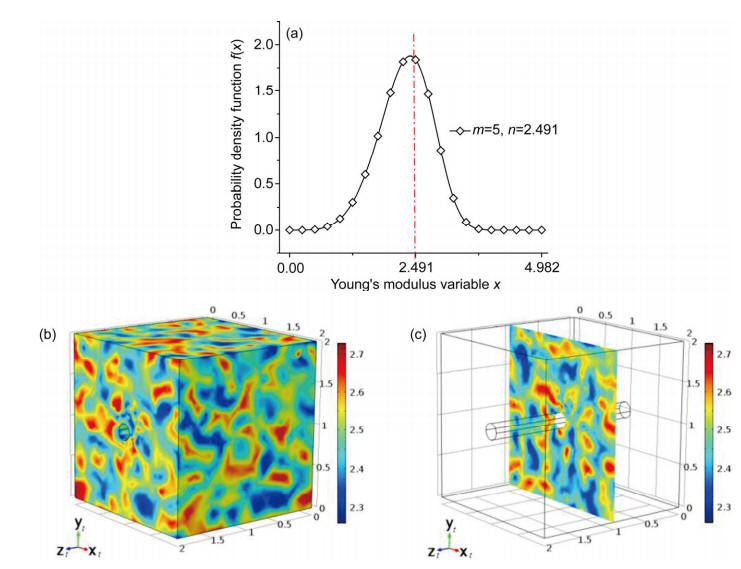 Link to IRAZU GEOMECHANICA simulation software at University of Toronto

Geomechanica’s Irazu simulation software is a state-of-the-art simulation tool based on the hybrid finite-discrete element method (FEMDEM or FDEM), a numerical method which combines continuum mechanics principles with discrete element method (DEM) algorithms to simulate multiple interacting deformable bodies. In Irazu, each solid is discretized as a mesh consisting of nodes and triangular elements. An explicit time integration scheme is applied to solve the equations of motion for the discretized system and to update the nodal coordinates at each simulation time step.

The progressive failure of intact rock material is modelled using a cohesive-zone approach, which aims at capturing the non-linear interdependence between stresses and strain that characterizes the zone ahead of a macro-crack tip known as the Fracture Process Zone (FPZ). When using cohesive-zone models, the failure of the material progresses based solely on the strength degradation of dedicated interface elements (known as crack elements) and therefore emerges as a natural outcome of the deformation process without employing any additional macroscopic failure criterion. Since the material strain is expected to be localized in the cohesive zone, the bulk material (i.e., the continuum, or unfractured, portion of the model) is treated as linear-elastic using constant-strain triangular elements. The bonding stresses transferred by the material are decreasing functions of the displacement discontinuity across the crack elements. Both Mode I and Mode II failure can be reproduced. In Irazu, the crack elements are interspersed throughout the material (i.e, across the edges of all triangular element pairs) from the very beginning of the simulation. Thus, cracks are allowed to nucleate and grow without any additional assumption or criterion other than the crack element constitutive response. Upon breakage of the cohesive surface, the crack element is removed from the simulation and therefore the model locally transitions from a continuous to a discontinuous statew. As the simulation progresses, finite displacements and rotations of discrete bodies are allowed and new contacts are automatically recognized.

References of numerical and experimental analysis

References of numerical and experimental analysis